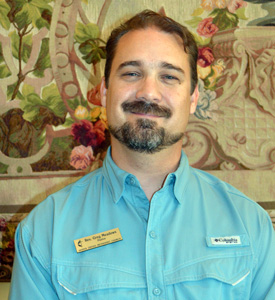 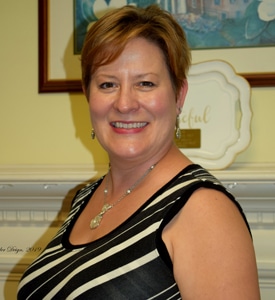 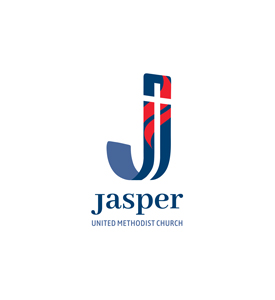 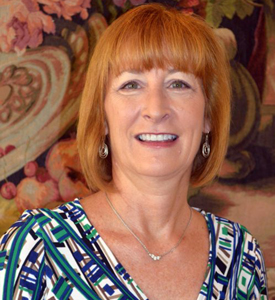 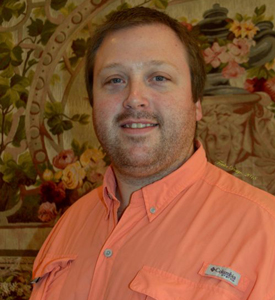 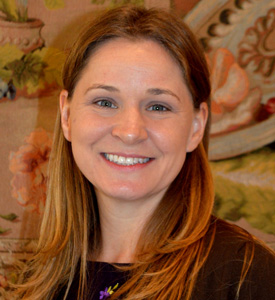 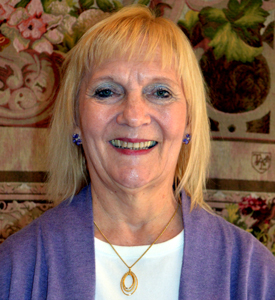 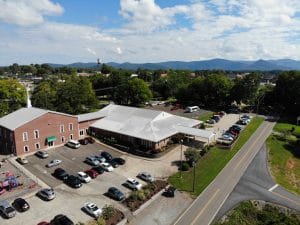 Jasper United Methodist church front entrance under the portico and through the double doors. There you will find the sanctuary. The entrance is handicap accessible.

The administrative offices are located in the building next door to the church. 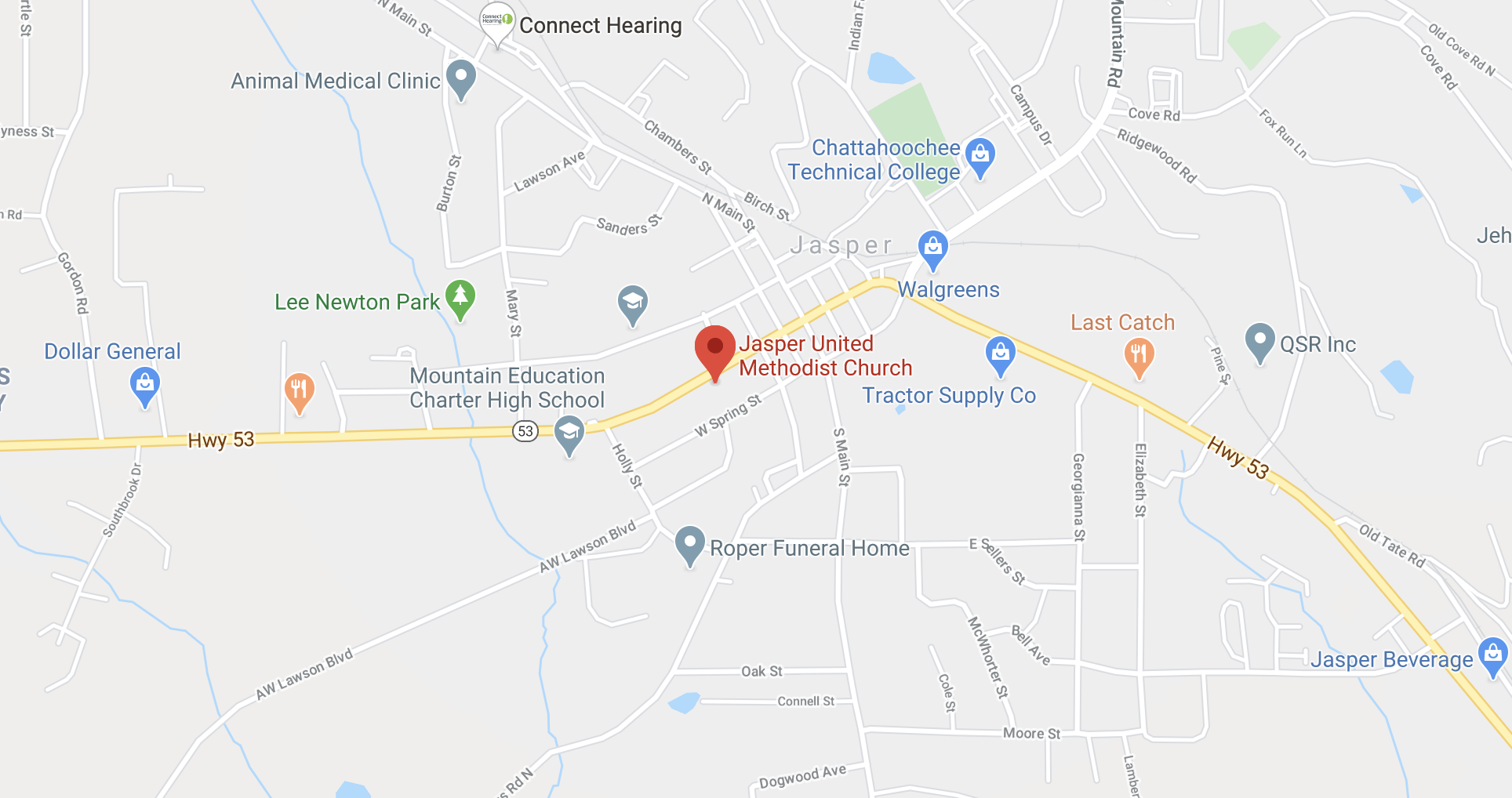 “Bring the whole tithe into the storehouse that there may be food in My house. Test me in this and see if I will not throw open the floodgates of heaven and pour out so much blessing that you will not have room enough for it.” (Malachi 3:10) The people of The United Methodist Church are:

part of the second largest Protestant denomination in the United States. Our worldwide connection includes more than 12.6 million members.

The United Methodist Church was formed when the Methodist Church and the Evangelical United Brethren Church merged in 1968. But we trace our heritage back to the movement begun in 1729 in England by John and Charles Wesley.

The Mission of Jasper United Methodist Church is:

To faithfully worship the Lord our God as Father, Son and Holy Spirit, to proclaim, by word and deed the good news of Jesus Christ, and to equip God’s people to do the work of the ministry. 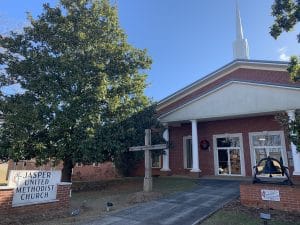 In the earliest days of Jasper’s history, even before Pickens County was created on December 5, 1853, the move began to establish a Methodist Church in this community. This movement was led by James Simmons, Charles McClure and James Lovelace.

In 1850 a building committee was appointed, and in spite of the approaching days of the Civil War, the church building was completed on one acre of land deeded by James Simmons to the Jasper Church Trustees.

In 1860 the log church was completed and the congregation was served by “local preachers”, dedicated men of God but without the formal training and ordination of modern-day Methodist ministers.

The original log building was used for a schoolhouse during the week and for church services on Sundays. Citizens of the town bought cemetery lots on nearby land that was given to the church and this money was used to help pay for that first log building.

The men of the church donated their work, hand planning the lumber, and the ladies cooked dinner and carried it to the workmen. They also swept out the shavings and did what they could to make the church attractive, clean and inviting. When it was finished, an “all day meeting” and dinner on the grounds was held. This celebration took place where the church cemetery is now located.

In those days, children and adults had to sit still on hard plank benches through long sermons. Whoever got to the church first was supposed to build a fire. The heater burned long, green firewood and the stove pipe would get so hot it would smoke, but the church was never warm in the winter. However, early records of a Quarterly Conference Report reflected that, “Sunday School is expected to survive through the winter of 1887.” The Jasper Charge was placed in the North Georgia Conference in 1868 and two years later, in 1870, a more modern frame building was erected. So well was it built that the main part of the structure, although remodeled and added to several times over the years, is still in use today.

Throughout its history, this church has been served by a long line of able pastors, among them Nath Thompson, Bishop W.T. Watkins, E.P. Kendall, Sanford McDonald, Robert Kerr, Charles Wilson and others who have left this mark on the congregation. This leadership has continued in recent years under the direction of Lloyd Lovern, Gerald Thurman, Lynn Walker, Max Caylor, Hoyt Jenkins, Herb Flanders, Jerry Peele, and at present, Chip Wilson.

A major renovation project was completed in 1949 when the building was moved back further from the road, which by this time had become a busy street. However, the lines of the old building were preserved. A daylight basement was added which provided Sunday School classrooms, restrooms, kitchen and an assembly/recreation hall finished in pine paneling. A new hot water system was installed, the grounds graded and grass sown. The sanctuary was completely re-decorated, including brass lighting fixtures and a choir loft added behind the pulpit. This work enhanced the worshipful atmosphere of the old church with the project costing approximately $11,000.

At that time, 1949, membership was 125. The Sunday School had an active roll of 121, an enviable percentage compared with present day Sunday School attendance.

In 1956 the church further improved its facilities by bricking the main structure and adding a three-story annex across the back. This provided more adequate kitchen facilities, recreation hall, pastor’s study, choir room, classrooms, nursery and storage room. These extensive improvements required a loan of $28,000 with approximately an equal amount of contributions. This loan was cleared in 1967.

A most notable advance by the Jasper Methodist Church was made when it went to a full-time ministry. In July, 1962 Dr. Charles Wilson was named the church’s first full time pastor. Excellent leadership was given by Dr. Wilson and the church took on a new spirit to move ahead with the members working with determination to ready an old dwelling on Main Street as a temporary parsonage. They moved to demolish the first house used as a parsonage in Jasper and drew up plans for a ranch-style, brick parsonage on the old parsonage site. Arrangements were made to obtain $20,000 to build it and this debt was cleared in 1974.

In 1977, under the capable leadership of Dr. Gerald Thurman, improvements were made to the sanctuary by adding storm windows, repainting, and carpeting some areas. The following year the church voted to replace the pews which had been made in 1904 of the finest oak timber by Rhyne Brothers Mfg. Company for $3.50 each. Stained glass windows were installed, lighting improved, new carpeting laid and the sanctuary generally refurbished. The 1978 improvements were met by bequests by the Kennemur Estate, the Bell Estate and contributions from the membership, with he work done by students from Pickens Tech. The expense for these improvements amounted to over $15,000.

From those earliest days when the ladies swept out chips and shavings from the log church building, the church has seen much activity and support from its women members. But it would be many years before they joined together in a formal organization. One hot July day in 1925, Miss Bert Winter and Mrs. Autry rode into the village of Jasper in a Model T Ford to organize a Women’s Missionary Society. Three women from the church wee interested enough to meet with them. Miss Bert quoted the scripture, “For where two or three gather together in My name, there am I in the midst of them.” They took heart and organized. The women’s group, though the name has changed many times across the years, has remained. Services rendered, volumes studied, money collected and spent at home and abroad for missions has been notable.

In 1988 a temporary addition to the fellowship hall was built by the men of the church. Also at that time, the church membership voted to purchase the property adjoining the church on the east side and the Harrison property (since that time this property has been sold) across Church Street for future expansion. In January, 1994 the church retired the note for this property.

In 1998, our beautiful sanctuary was destroyed in a fire. There was a multi-purpose building being built at this time at the lower part of the property. That building was completed in November of that same year and is now being used as the current Sanctuary and Education Building.

The Jasper United Methodist Church has a historic background and combined with today’s enthusiasm goes forth into her third century of proclaiming “Jesus Christ is Lord.”